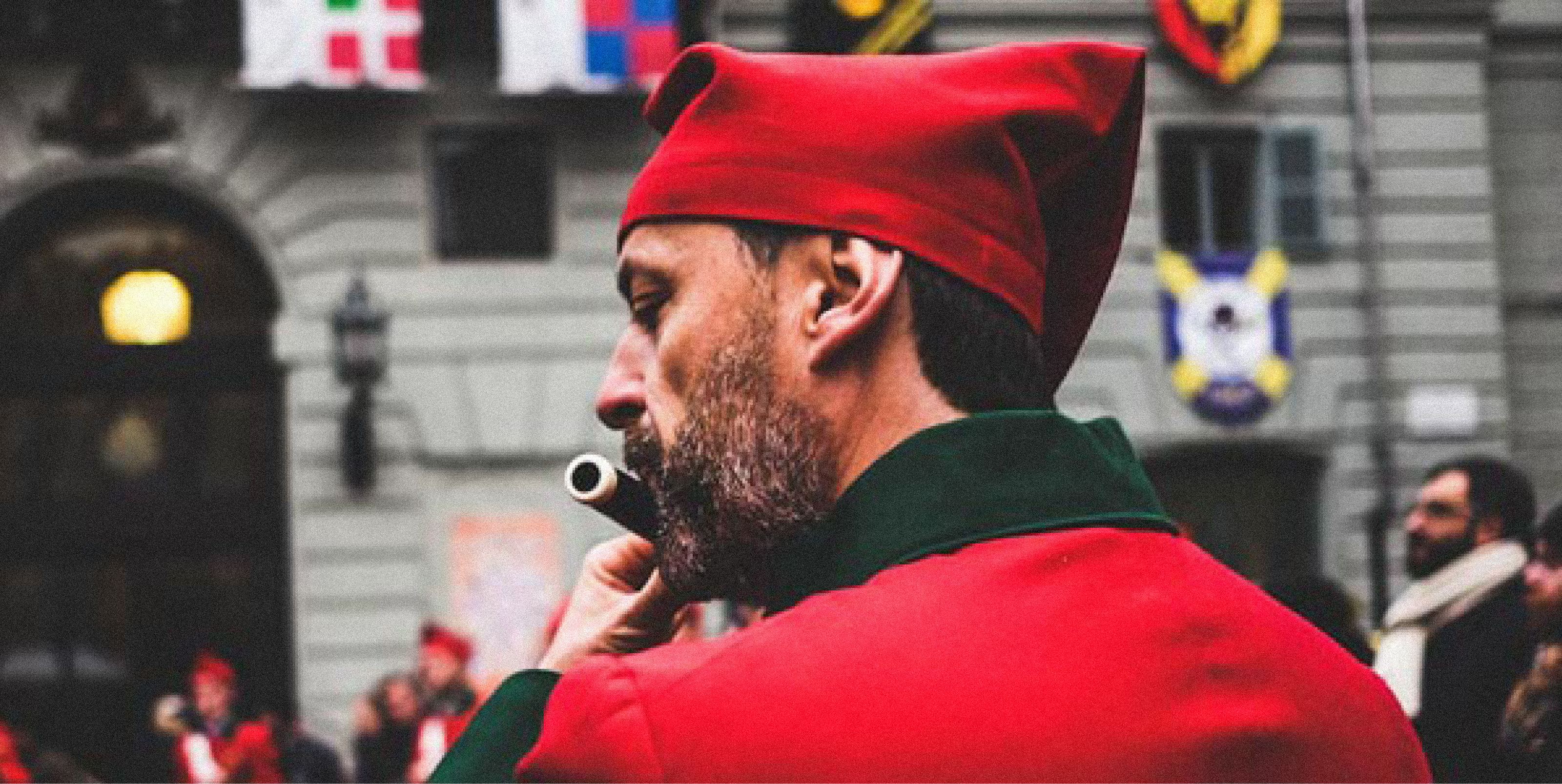 The Epiphany is the day that opens the Historical Ivrea Carnival. On the 6th of January, for the first time, the Pifferi e Tamburi(Flutes and Drums) parade around the town while playing the pifferate music.

Still on the same day we have the investiture of the Generale (General) at Piazza di città (town square).

The Pifferi e Tamburi trace back to 1808, even though their musical tradition had been documented since the 16th century. Their origin is strictly related to the militia that once escorted armies. The Credendari salute the Magnifico Podestà (Chief Magistrate) in front of the Corteo Storico. After that comes the Salt and Bread ceremony and the Corteo Storico, Credendari, Magnifico Podestà, Pifferi e Tamburi procession.

To wrap things up there is the Duomo mass and the Church Candle Ceremony: the Magnifico Podestà, escorted by his entourage and by the Corteo Storico and Credendari, gifts the Bishop the Church Candle to pray the Madonna for the town’s protection. This moment was inspired by an ancient ritual that took place at the Tre Re (three kings) Chapel on the Mountain Stella. This chapel was built around the year 1220 after Saint Francis’ advice. 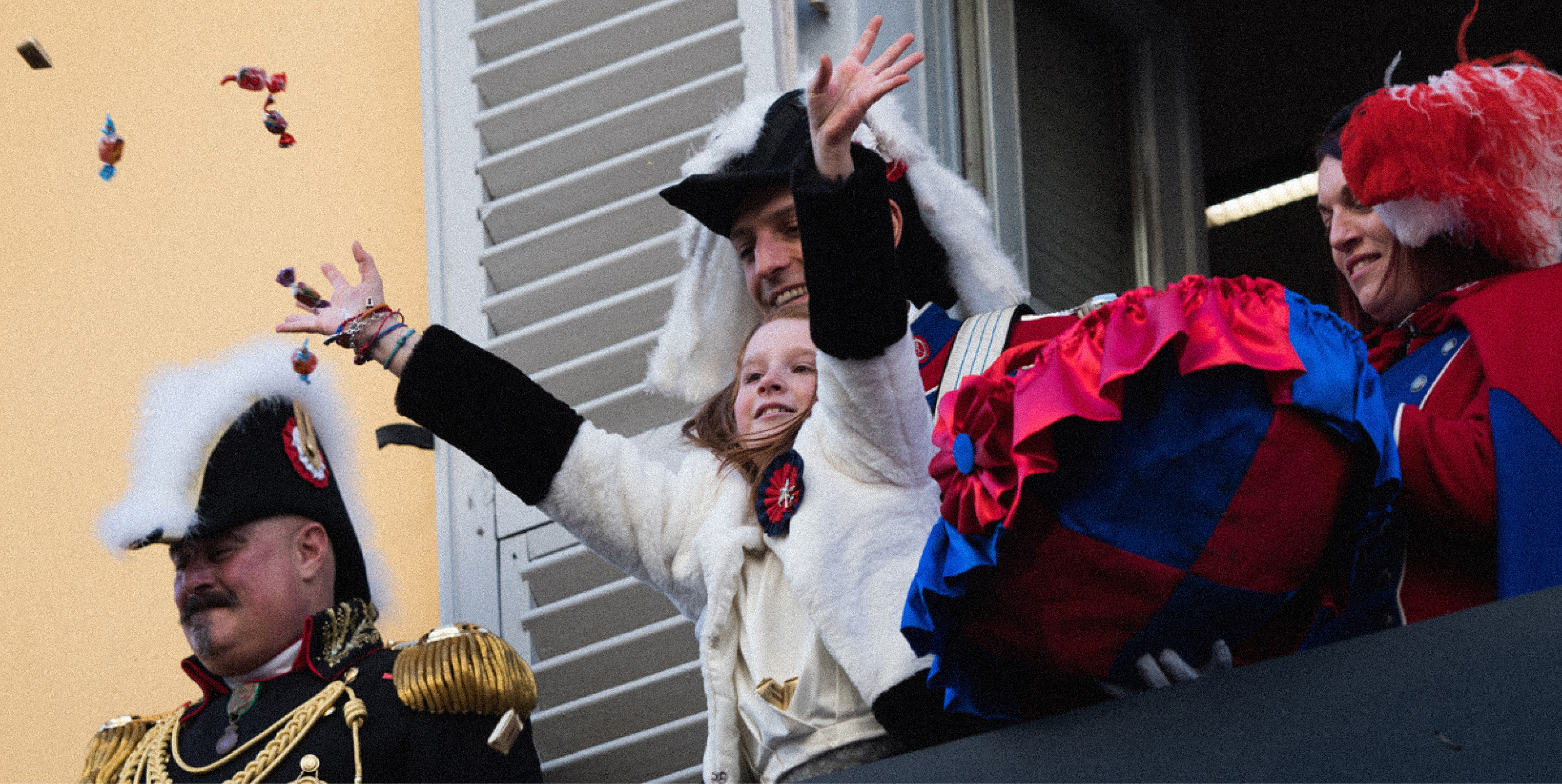 The third to last Sunday before Carnival

Sunday morning is the day of the Fagiolate (Bean Feasts). People can get the fat beans at the Bellavista Bean Feast (Kennedy street) and San Giovanni (Boves square). The General, the General Assembly and the Pifferi e Tamburi visit the Bean Feasts.

Right after that we can see the Prise du Drapeau ceremony at Town square: in here the Alfiere dello Stato Maggiore (Standard Bearer of the General Assembly) receives a flag. The flags are Carnival characters in a very real sense: they pinpoint the town parish churches and they are carried by the Alfieri (Standard Bearers).

On Sunday afternoon we have the first Alzata degli Abbá: the procession heads to the Piccoli Priori dei Rioni of San Grato house, San Maurizio, Sant’Ulderico, San Lorenzo and San Salvatore. The Aiutanti di Campo raise the Abbá (Abbot) and display it to the crowd while the Pifferi e Tamburi  play their music and the Generale salutes. The Sostituto Cancelliere reads the Record Book and his parents, the Abbá, the General and the witnesses sign it. The Abbá are the young priors of the parish churches; in the past they were influential and renowned chiefs in charge of the holiday events. Today, they are brought to life by children, two from every parish church. 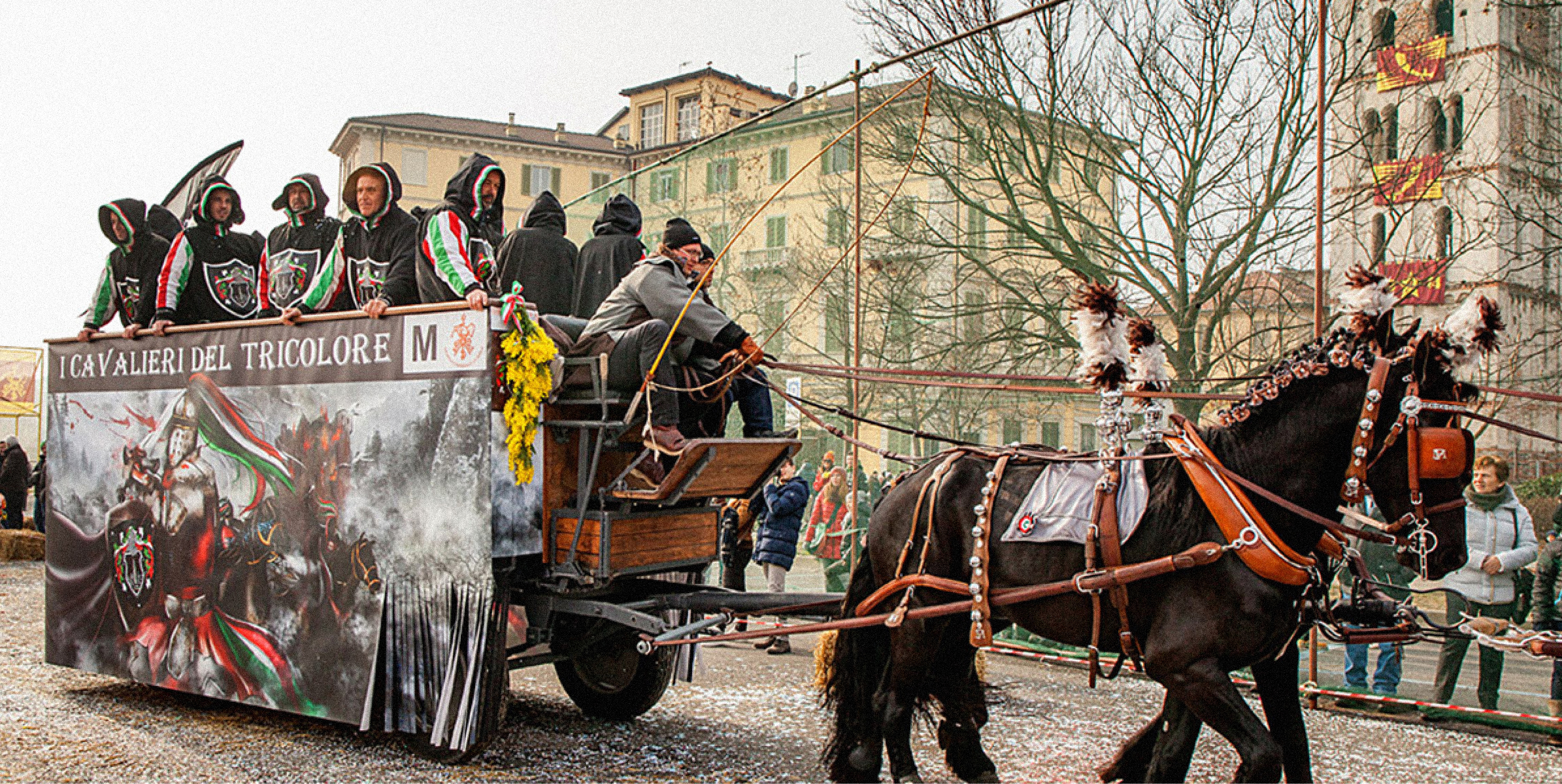 The penultimate Sunday before Carnival

Sunday morning is the day of the Fagiolate (Bean Feasts). They are in different places in town: the Bean Feasts of Montenavale, Cuj dij Vigne (Modina restaurant); Torre Balfredo (at Casa Giuseppina, 2 Frandina street at 10,30 a.m.); Santi Pietro e Donato (11 San Pietro Martire street). The Generale (General), the Stato Maggiore (General Assembly) and Pifferi e Tamburi (Flutes and Drums) come by to visit them all.

In the meantime the carri da getto (Orange Carts) parade the town center streets; their introduction happens at Rondolino square. Then at midday of the same day the reconciliation ceremony between the Rioni di San Maurizio people and the Borghetto sul Ponte Vecchio people takes place. The procession, with the official flag holder at the forefront, heads to the house of the Abba (Abbot) from San Grato, San Maurizio, Sant’Ulderico, San Lorenzo e San Salvatore (Abbot). The helpers raise the Abbá from the balcony to show it to the crowd while the Pifferi e Tamburi play their music and the Generale salutes. The Sostituto Cancelliere (Deputy Chancellor) reads the Record Book and his parents, the Abbot, the Generale and the witnesses sign it. To complete the ordeal, the historical procession parades in town together with the Generale headed to town square. 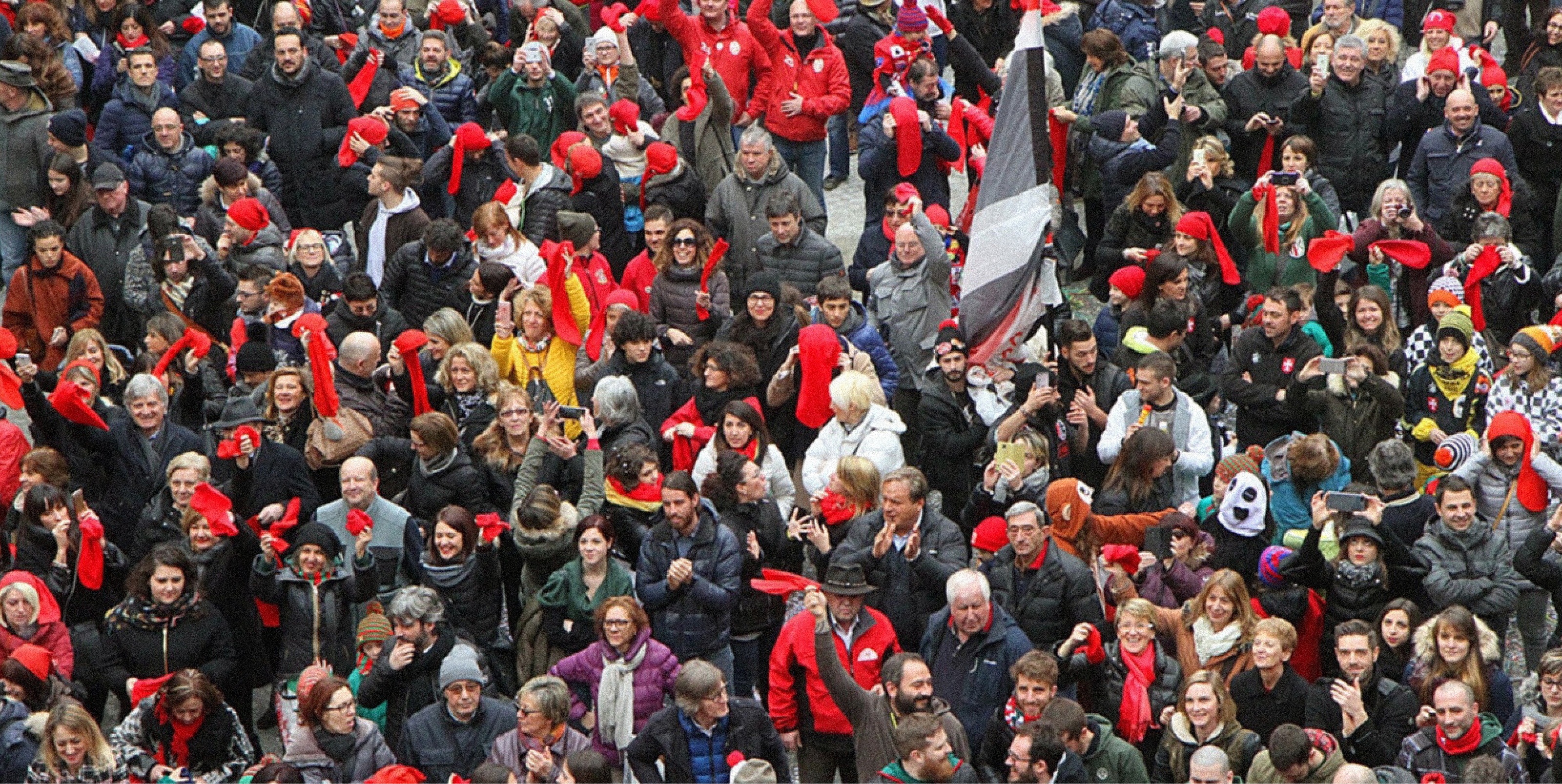 On Fat Thursday the day gets started with the symbolic handover of power from the Ivrea Mayor to the Generale (General). The citizens are encouraged to wear the Berretto Frigio (Frigio beret) during the Orange Battle days. The Corteo Storico (Historical Procession) marches around town and the children party at Ottinetti square. There also is the Cuj Bean Feast at Palma street.

The Historical Procession then pays its homage to the Bishop, while the Abbà (Abbots) see the Mayor. The Oditori and General Administrators of the militias and Genti di Guerra (war people) from Canavese receive their investiture.

The night in town offers a wide selection of parties: you can wear your masks to participate in the J’ Amis ad Piassa d’la Granaia party at Ottinetti square. In the meanwhile the aranceri (Orange Throwers) celebrate, everyone in their own square: the Mercenari (Mercenaries) at the Public Gardens, the Credendari at Freguglia square, the Diavoli (devils) at Diavolandia, the Pantere (panthers) at Vicoli Cerai square, Scacchi (chess) at Palma street, Morte (death) at Cavour Avenue, Picche (pikes) at Città square. 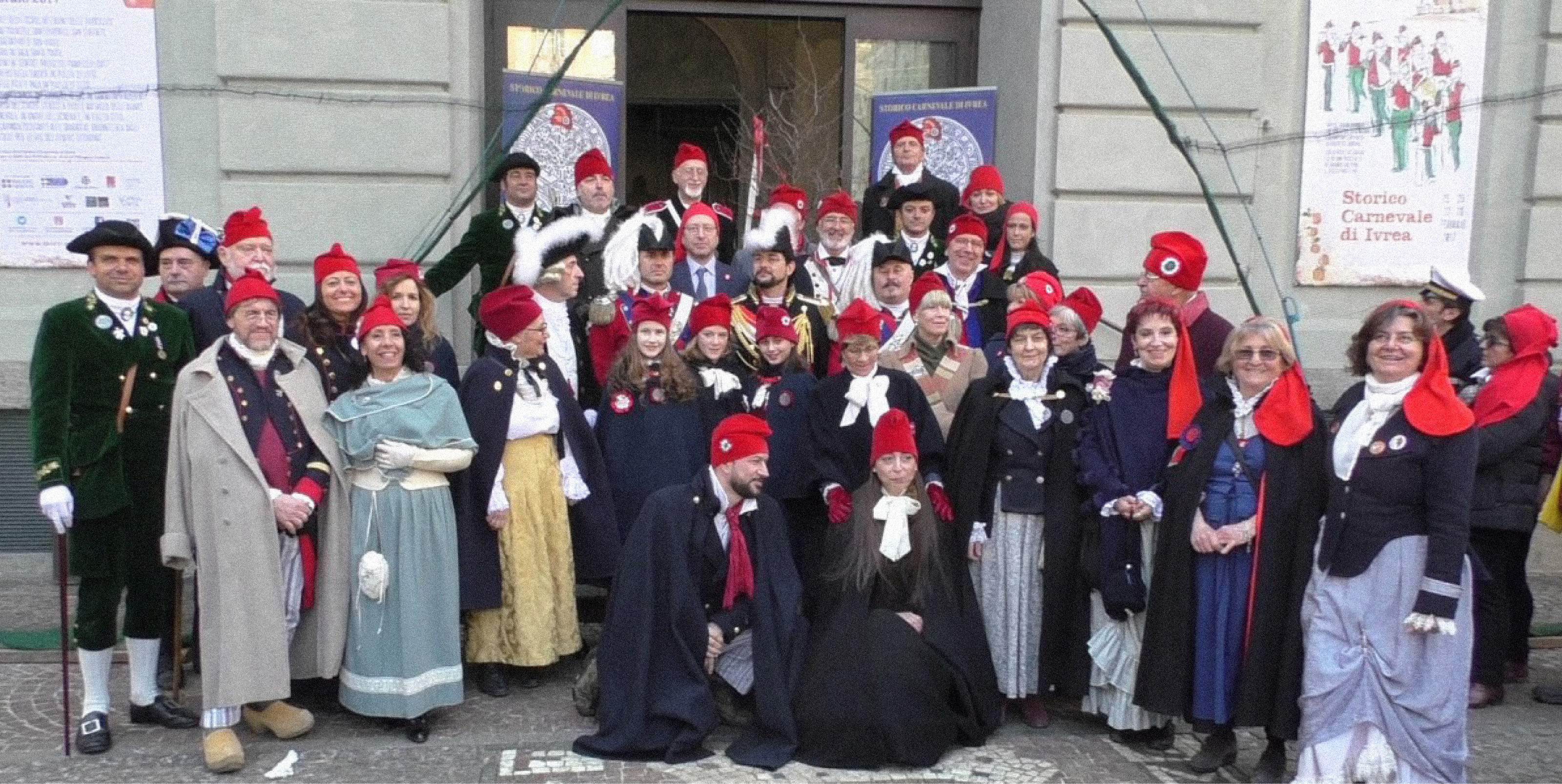 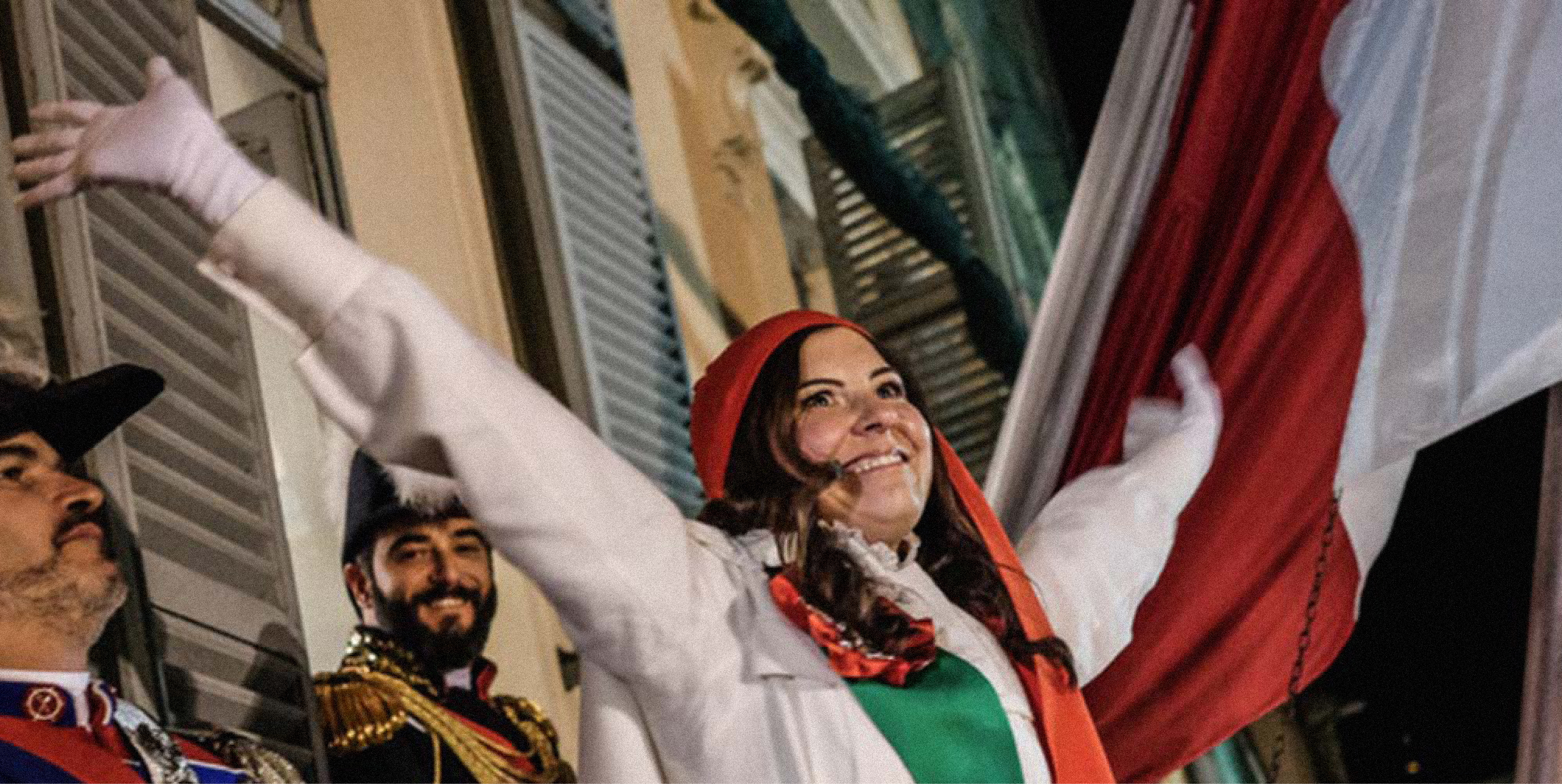 On Saturday the Carnival celebration is in the thick of things: the Vezzosa Mugnaia (Miller’s daughter) and her Scorta d’Onore (Honorable Entourage) enter the scene. This is one of the most exciting moments of the Carnival, held at the Municipal Palace loggia. Right after that, the Corteo Storico (Historical Procession) kicks off, with the participation of the Mugnaia. The aranceri (Orange Throwers) join in at Lungo Dora (Dora riverfront), while the aranceri parties light up the city squares. 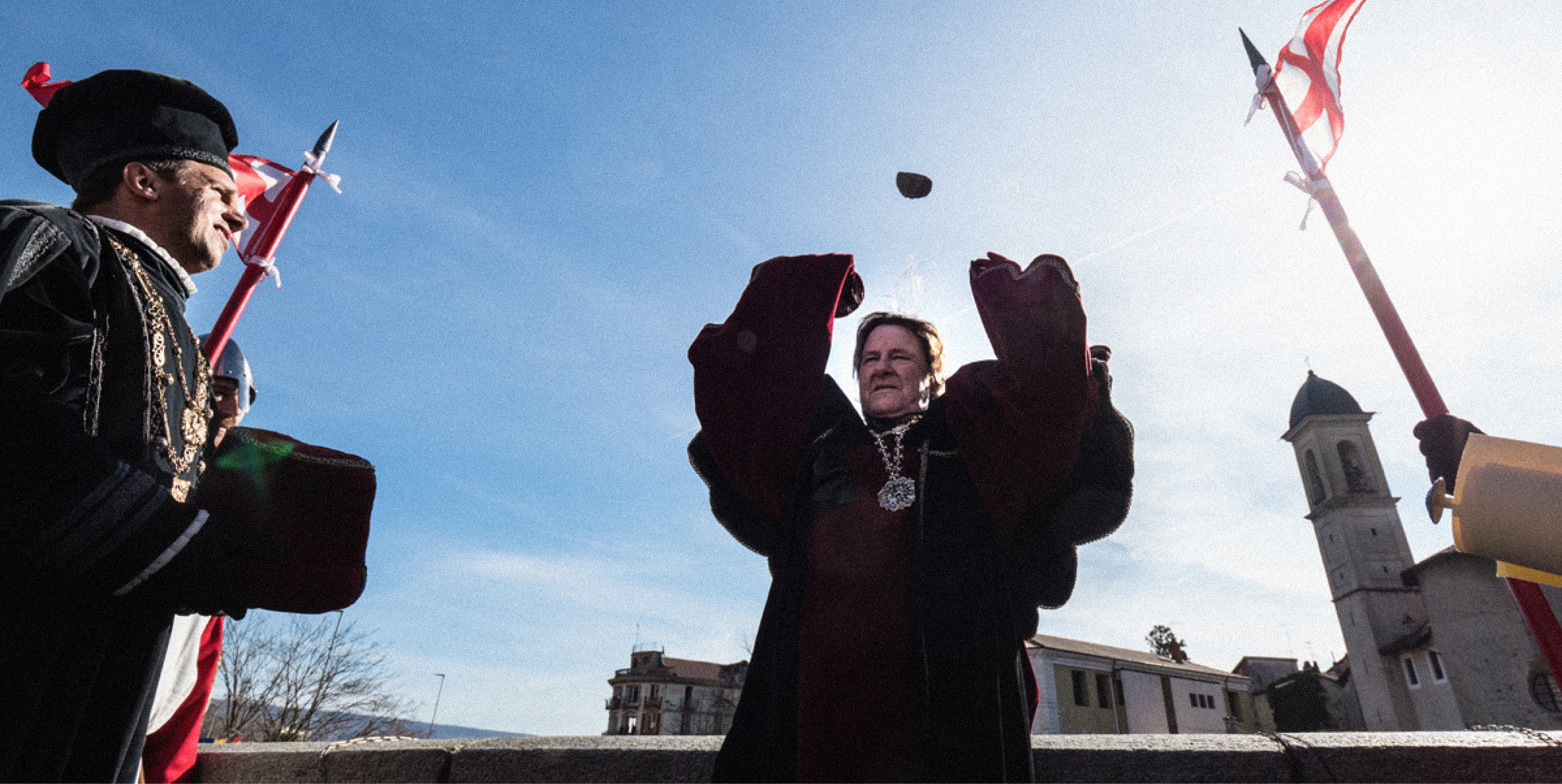 This morning also sees one of the most symbolic moments of the whole Carnival: the Preda in Dora. Il Podestà (the Chief Magistrate) and his entourage together with the Credendari, all escorted by the Alfieri (Standard bearers) and the Pifferi e Tamburi(Flutes and Drums), throw away down the valley a Castellazzo stone by saying the formula: ‘Hoc facimus in spretum olim Marchionis Montisferrati, nec permittemus aliquod aedificium fieri ubi erant turres domini Marchionis’ (‘We do this to show our contempt for the Monferrato Marquis, we will never allow anybody to build anything where the old Marquis towers used to be’). This ritual expresses the disdain and refusal for any kind of tiranny.

In the afternoon the first Orange Battle finally kicks off, where the people start with the deployment of the carri da getto (Throwing Carts). Right after that the Corteo Storico (Historical procession) march takes its first steps. 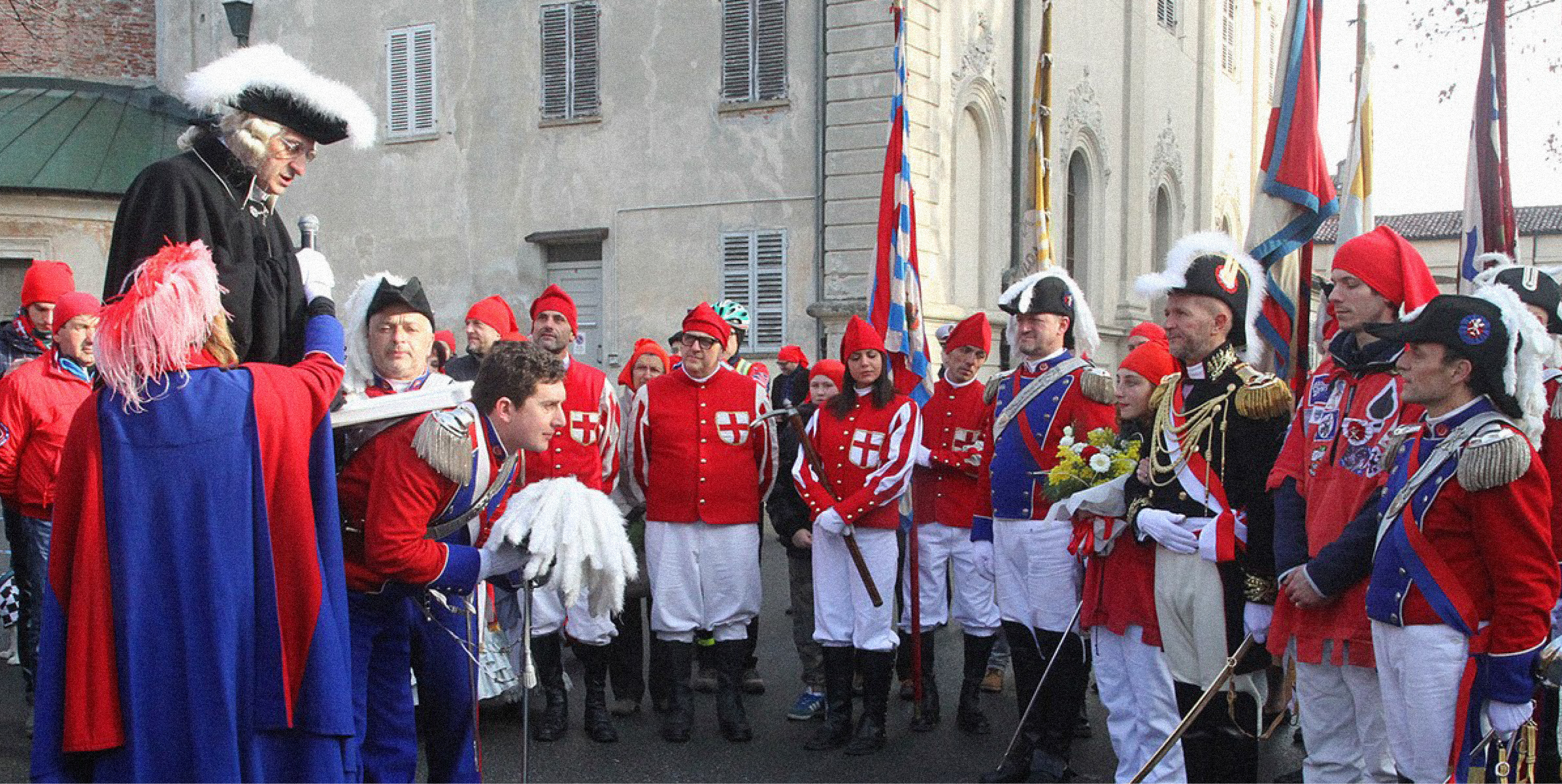 On Monday morning, the Sostituto Gran Cancelliere (Substitute Great Chancellor) reads the ceremony records and the newlyweds, armed with a pickaxe and a shovel, both hit the ground on the exact spot of the ‘Scarlo’ (heather and juniper pole) while all the people say out loud the ritual formula: ‘As pianta ‘l pic a l’uso antic’.

The day continues with the second day of the Orange Battle, where the people start the deployment of the carri da getto (Throwing Carts). After that, the Corteo Storico (Historical Procession) march kicks off. 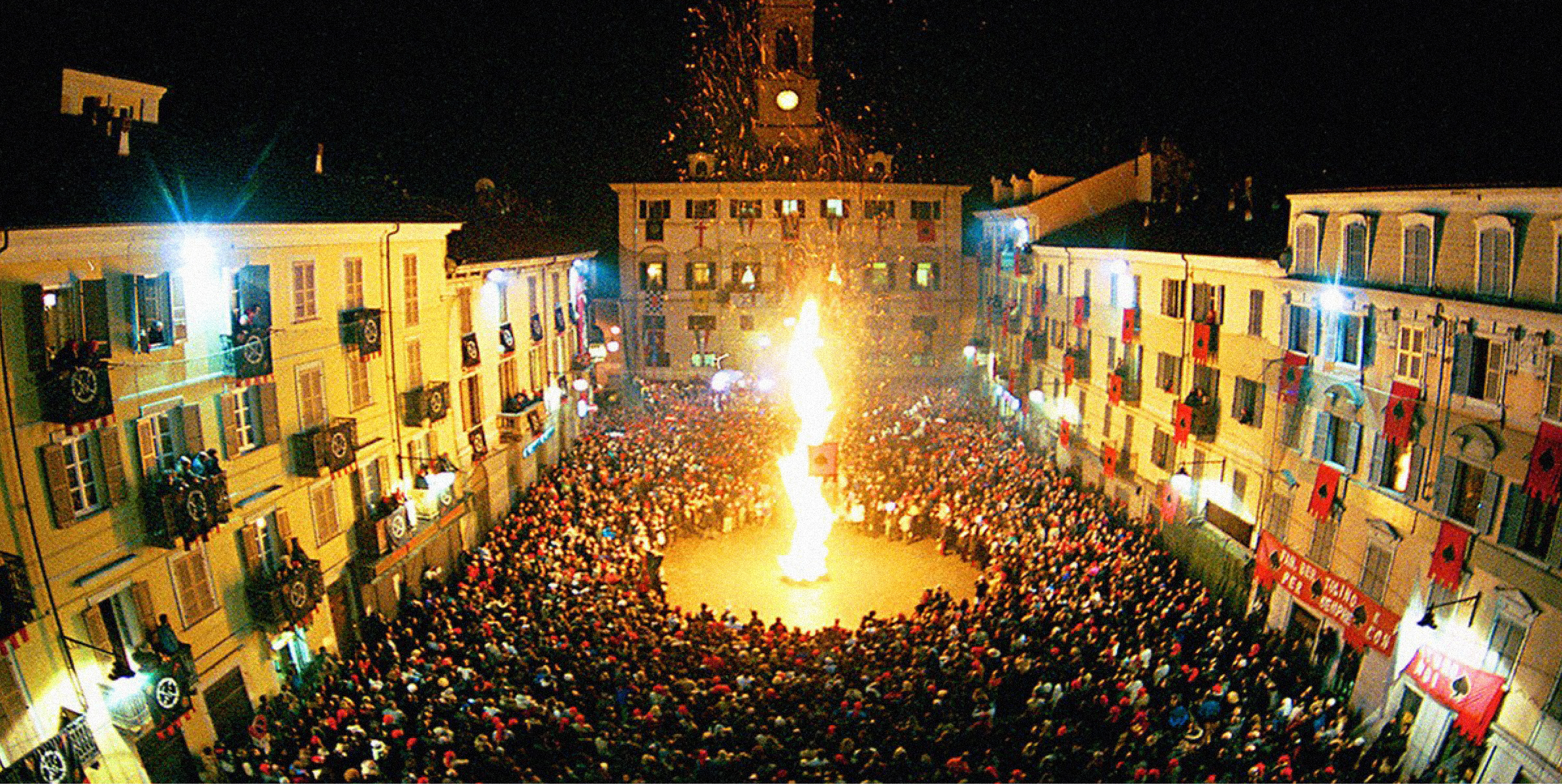 Tuesday is the last day of the battle. After the deployment and the last Corteo Storico (Historical Procession) march follows the award ceremony of the squadre degli aranceri (Orange Throwers teams) and the carri da getto (throwing carts) at Città square. The ranking of the first three on foot teams depends on their shot, figure and accuracy. The first three Spans and the first three Four horses Shots are assigned according to their horses, harnesses and control.

In the evening the Carnival is waved off by the people through a Funeral, but not before the burning of the Scarli (a heather and juniper pole) in the town squares. The Mugnaia (Miller’s daughter) witnesses the burning of the Scarlo of Città square, standing up on her golden carriage. When the Abbá (abbots) start the fire, she raises the sword (symbol of the liberation from the tyrant) up until the flag on top of it turns completely to ashes. If the flames reach the top of the pole fast, it is viewed as a good omen for the rest of the year. The last Scarlo (pole) that is set on fire is the one from the San Grato parish church at Lamarmora square. 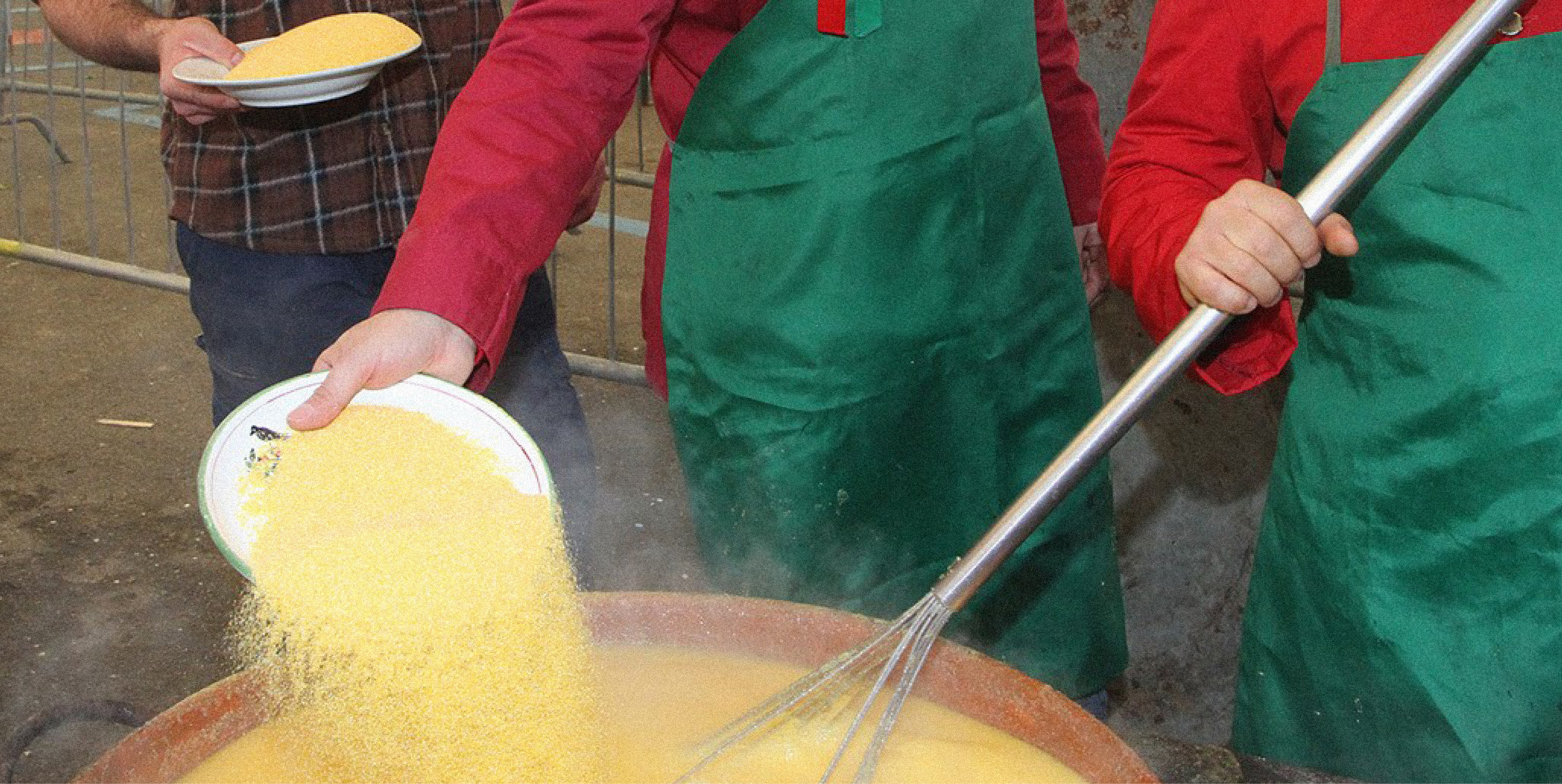 The first day of Lent people eat polenta and codfish, distributed by the Bano led Croatian Committee at Lamarmora square.